On September 5, 2019, in the presence of the Prime Minister of the Czech Republic, Andrej Babis, the Embassy of the Czech Republic in Budapest introduced its “Nanowall”, which thanks to the photocatalytic coating FN Nano made by Czech company Advanced Materials JTJ (amjtj.com) decomposes car emissions, including greenhouse gases.

This technology aligns perfectly with the motto “The Czech Republic: The Country For The Future” because it not only improves the air quality in the Hungarian capital, but also mitigates the impacts of the climate change. At the same time, the FN Nano photocatalytic coating decomposes all organic impurities, which will keep the Embassy’s granite facade clean for the next decade.

The Czech Embassy’s “Nanowall” was introduced during the meeting of Mayors of Czech and Hungarian sister cities organized by CzechTrade at the Czech Embassy in Budapest in cooperation with the Embassies of Hungary in Prague and the Zlín Region.

The Embassy used this opportunity to support the Czech Nanotechnology Association and other Czech companies by setting up one-on-one meetings with Hungarian partners. For example, Advanced Materials JTJ, National Winner for the Czech Republic in the Innovation Category in the European Business Awards 2019 Award, had an opportunity to present its ecological photocatalytic coatings to representatives of the Hungarian Road and Motorway Directorate (offering air purification as well as surface protection to roadway noise barriers) and to a technical expert from the Hungarian Parliament (offering the same advanced protection to neo-gothic buildings on the bank of the Danube river).

In addition, Embassy’s representatives arranged for presentations of FN Nano coatings at the newly built testing ground for autonomous vehicles in Zalaegerszeg (Zalazone) near the border with Slovenia, as well as at the Formula 1 race track in Mogyoród (Hungaroring) Northeast of Budapest, the Budapest Technical University and the Hungarian Ministry of Innovation and Technology. 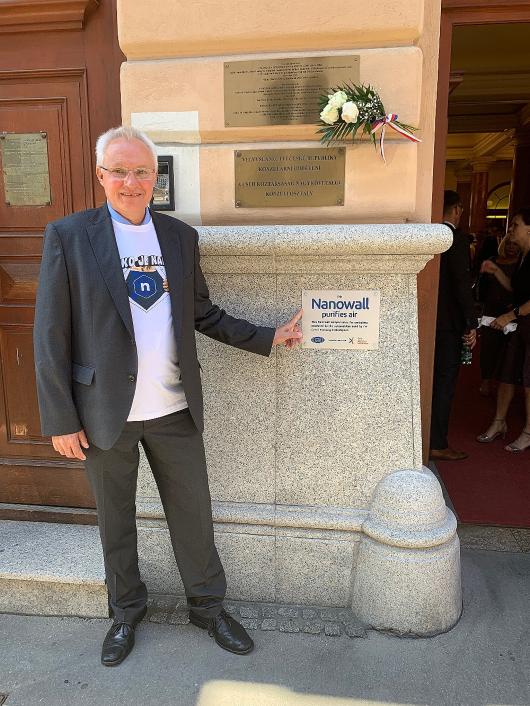 “I would like to thank Ambassador Tibor Bial, the Embassy’s Economic Department and the Czechtrade Office in Budapest for the excellent organization as well as for the support of Czech companies. The Embassy in Budapest is an illustrative example of respectable behavior in its host country, and we should all behave in this respectful way, because we all are here, on our planet, only for a short visit.

This is especially important today when there is a practical technology that can remove air pollutants without chemicals. According to the methodology of the J. Heyrovsky Institute of Physical Chemistry, at the Czech Academy of Science, fifteen square meters of FN Nano photocatalytic coating eliminate emissions compensating for the operation of one diesel car in Budapest. To put it simply, these days we only need a paintbrush to behave ecologically responsible.” says Jan Procházka.