“Advanced Materials-JTJ” could invest € 4.2M and generate 100 jobs in Navarre, according to the results of research

Signing the agreement with the Czech company  Advanced Materials JTJ 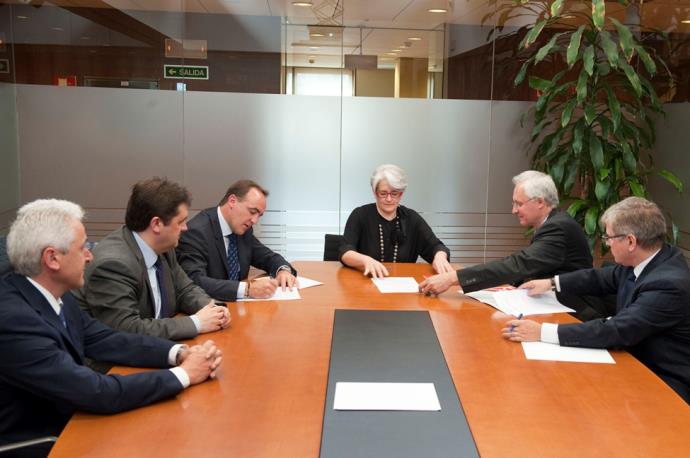 The Government of Navarra and a Czech company Advanced Materials-JTJ collaborate on research and development of new industrial applications of titanium oxide nanoparticle in the health, environmental or transport sector. If the results of the tests are satisfactory, the company would consider an investment of 4,250,000 euros for the annual production of 5 million liters of the product and the creation of 100 jobs in Navarra.

In order to establish the specific terms of this partnership, the Minister of Rural and Environmental Development and Local Government, José Javier Esparza, signed an agreement with representatives of the company this morning. The event was also attended by the First vice-president and minister for Economy, Finance, Industry and Employment, Lourdes Goicoechea.

Titanium oxide is a chemical compound that is primarily used in the field of pigments for its intense white color, consuming in such use over 95% of world production. It is also used in other fields, as an industrial dye in cosmetics, and as a catalyst in surface treatments, textile and water and air purification.

At present, the Czech firm has two research projects based on the application of products containing nanoparticle in Navarra: one with the public company NILSA, for wastewater treatment, and another with the Navarra Institute of Technology Agribusiness and Infrastructure (INTIA), for use as substitutes for common pesticides in vineyards. In both cases, the results will be announced before the end of 2014.

Under the collaboration agreement signed today, the Government of Navarra undertakes to explore, together with the company, the chances of developing new applications of titanium oxide nanoparticle technology in additional areas, such as health aspects ( hospital public areas), environmental (improvement of urban air quality), or transportation (cars, buses means).

In the last decade, advances in nanotechnology have allowed development of new titanium dioxide products with significantly increased efficacy. This has reduced the cost of their applications, positioning them very competitively on the markets, especially as a catalyst and in utilization of electrochemical solar energy.

The application of titanium dioxide, spread in central Europe, has been achieved by utilization of the photocatalytic process. This means you need light for the process to occur, so it takes place during the day and not at night, working sunny or cloudy weather. The choice of this treatment over others is due to a commitment to use clean, renewable energy such as light for environmental remediation. The necessary substance – recyclable titanium dioxide catalyst is required in a small quantity as low as 1 kilogram per thousand cubic meters of waste water, its environmental impact is virtually nil.

The company “Advances Materials JTJ” is dedicated to the research, development and innovation on nanoparticles and their practical application and its industrial proprietary products FN1, FN2 and FN3, based on nanoparticles of titania are covered by international patents.

Research underway in Nilsa and INTIA

For NILSA, the research project is focused as a final treatment in wastewater treatment. After five months of tests on the premises of Tudela, Monteagudo-Arguedas and Valtierra, the application of this agent will be extended to plants located at the basin of Alhama (Cintruénigo, Corella and Fitero) and Huecha (Cortes) rivers. The use of titanium dioxide enhances the microbiology of treated water by eliminating pathogens such as bacteria Escherichia coli and Salmonella, as well as substances derived from chlorine, remains of human and animal drugs (especially antibiotics), pesticides and pesticide residues, and certain breakers endocrine (hormone).

INTIA subscribed exploring application of products that feature titanium oxide nanoparticles as a replacement for current plant protection in vineyards. The testing results are expected in the month of October. Additionally, an analysis of the potential application of the products in the field of animal health is underway.

The original press release in Spanish: