Lidovky.cz Informs about the Use of PROTECTAM FN in Pre-schools 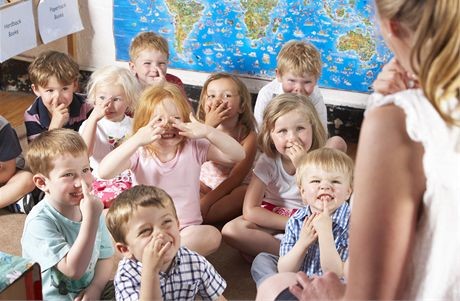 OSTRAVA A special coating with nano-particles is protecting children in two pre-schools in Ostrava from harmful materials and the spread of infection.  Illness among the children has significantly decreased.  The nanotechnology firm Advanced Materials applied the coating on the walls of classrooms.  The company reported on this in a press conference on Thursday.

The company is planning to begin a project in Ostrava for the largest air cleaner in Central Europe and wants to apply a coating of nano-particles to ten thousand square meters of the exterior surface of a building in the center of that city.  The Institute of health measured the effects of the coating on the ceiling of a pre-school in Paskov.  According to the firm, the measurements proved that the concentration of micro-organisms in the treated rooms dropped by 30 to 40 percent.

According to the school’s Director, Libuše Klimundová, the effect of the coating was seen in a reduction in illness among the children.  “In February 2013 there was average attendance by 13.2 children in each class, but in March 2013 attendance increased by 31.8 percent.  And there was even an epidemic of influenza in our region,” said Klimundová.

“When measured in August, half a year after application of the coating, the total number of micro-organisms in the school fell by 57 percent, compared to the baseline level,” said Petr Michálek of the company nano4people. A second pre-school in Ostrava where he coating was applied was at the School of Mines – Technical University in Ostrava.

The company Advanced Materials applied PROTECTAM, a second generation coating material with photocatalytic effect, in the school.  The surface formed by the coating cleans the air of pollutants, allergens and unpleasant odors and also eliminates micro-organisms, including viruses and bacteria.  One square meter of nano-particles cleans three million cubic meters of air in one year.  The process works as long as light falls on the coating.

The firms Advanced Materials and nano4people also are planning a project for the largest air cleaner in Central Europe.  They want to apply the coating with nano-particles to a building in Ostrava with an exterior surface of ten thousand square meters.  That way a favorable micro-climate with a lower incidence of pollutants will be created.

“Forming such a microclimate would clean the air for the population in the area of the building,” said Petr Michálek from nano4people. According to him 30 billion cubic meters of air will be cleaned in the center of Ostrava in one year.

Besides the pre-schools, a coating of nano-particles was applied in, among others, the PORG high school in Ostrava, a hospital in Kladno, a number of doctors’ offices, an aquapark and a hospice in Frýdek-Místek. Besides cleaning the air the coating also protects the façades of buildings.

Advanced Materials is now working on a project for decontaminating water in Malaysia and Vietnam by removing dioxins and DDT using nanotechnology.  The company would also like to use the technology to keep swimming pools clean without the use of chlorine.  This year, Advanced Materials also obtained important patents in the United States for a process of manufacturing nano-particles.  The patented process represents a breakthrough in low cost production of high-quality nano-particles of titanium dioxide